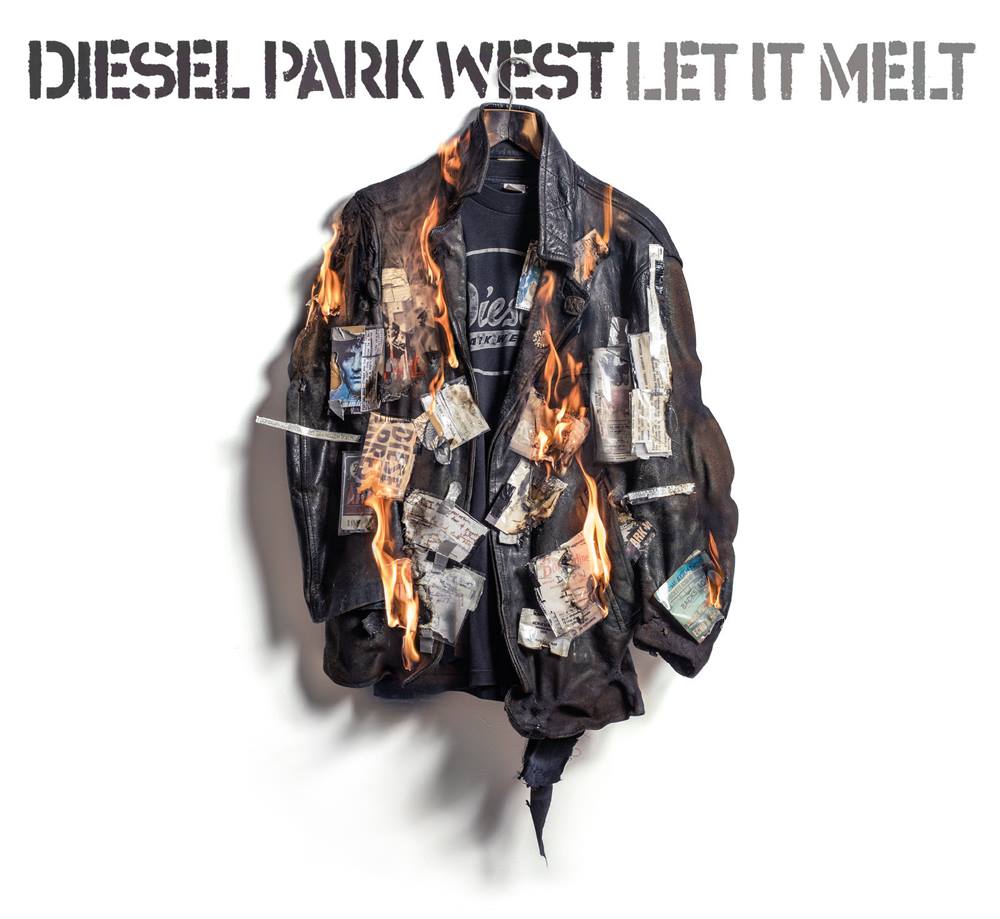 There are bands that go the distance. And then there is Diesel Park West. In a tale of Homeric proportions, the group from Leicester, England have kept faith throughout a career that stretches back, unbroken, to the era of major label deals, MTV and music industry excess. Now, 30 years after their first album Shakespeare Alabama, a new chapter begins with the release of Let it Melt, an album of savvy, street-survivor, sign-of-the-times rock & roll that only a band with their immense experience, resilience and know-how could have written and recorded.

“We’ve never lost the spark,” says singer, songwriter and guitarist John Butler. “We’ve never stopped writing, recording and gigging. We’ve never let the setbacks encroach on our creativity. We’ve only ever judged ourselves by the standard to which we are performing. And we’ve pushed on through.”

Let it Melt is their debut album on Palo Santo, a hip, independent label located in Dallas, Texas and although it is actually the ninth studio album by Diesel Park West, it feels like a debut in another sense as well. On the first day of recording, Butler asked Morris what kind of album he thought the band should make. “One that we like,” the drummer shot back. “Out of the mouths of babes and drummers comes the truth,” Butler says. “We spent a lot of time in the old days being pressured by our paymasters on the major labels to do this, don’t do that. This album is simply made up of new songs that we like to play and more to the point, that we like to listen to. It’s almost as if we had to do nine albums to get to this starting point. And I’m not saying that in a flippant way. There’s a deep seam of truth in that statement.”

With a title that cleaves an appropriate passage between classics by the Beatles (Let it Be) and the Stones (Let it Bleed), Let it Melt is a masterclass of wry, observational lyric writing and wiry, anglo-americana riffing. Songs such as Living in the UK, Bombs Away, Across This Land and Let it Melt chronicle the state of the modern world with a louche swagger and an incisive wit.

“When you’re 19 or 25 or even 35,
you can’t really write from the
standpoint of someone who’s been
around for a long time,” Butler says.
“It’s only now that I’ve got the
experience to write a song like The
Golden Mile – a metaphor for
finding yourself on the last stretch.
It doesn’t have to be a dark, grey,
end-of-the-line hurtling towards the
final curtain situation. It’s actually a
blast to get this far.”

How have they done it? Diesel Park

West were born in the era of music business plenty. Signed initially to the small, independent Food Records, they were acquired by EMI, who signed the Food label, simply to get their hands on Diesel Park West. The band’s epic first album, Shakespeare Alabama, produced by Chris Kimsey, received glowing reviews, established a solid fan base and made a promising dent in the UK album chart at No.55. They subsequently placed no less than six singles in the UK chart, but the breakthrough to a level of commercial success commensurate with the band’s talent and potential, remained elusive. As the 1980s drew to a close, the baggy scene in Manchester was sweeping all before it, and then as the 1990s got underway Britpop took over. But Diesel Park West never hitched themselves to any passing bandwagons.

“There was so much money sloshing around in the record company coffers,” Butler says. “From CD sales of Dark Side of the Moon, from the Beatles, from Queen, it was coming in from all sides, and they became imperious about it. We were the beneficiaries of some big advances, but there was a dark side to it. It made lateral thinking and innovation virtually impossible. There was a flabbiness in the thinking. And some of the excesses we encountered were mindblowing.”

Shifting their affairs back to the more grounded world of indie labels, the band released their genius third album Diesel Park West Versus the Corporate Waltz on Demon. A commentary on their experience of major label madness, with songs including Good Times Liberation Blues and The Cat’s Still Scratching, this was an early period masterwork which, ironically, given the subject matter, languished in the margins for want of a large scale promotional budget.

As the 1990s wore on and the industry underwent seismic changes, Diesel Park West scaled down their operations but maintained a full touring schedule and a consistent output of great new albums – FreakGene [1995], HIPReplacement [1998], Thought for Food [2000]. Butler also found time to launch a solo career with his debut album The Loyal Serpent [1997], an enduring cult favourite which has just been reissued, also by Palo Santo, as a special vinyl edition.

The band carried on into the new millennium, ploughing through the MySpace era and into the brave new world of Spotify, smartphones and social media.

“We’ve done a lot of hard labour since the days when EMI paid all the bills,” Butler says, without a trace of bitterness. “We’ve been breaking rocks since then. But we’ve stayed with it.”

In the latest twist to the story, a deal was signed with Palo Santo to release the new album, Let it Melt.

“They got in touch, out of the blue,” Butler says, “I sent them some early monitor mixes of the new tracks and they wanted to get involved. They came over and we met up at a show in Brighton. They are genuine people, and very smart. It’s been great dealing with them.” Given the rootsy, riff-driven sound and freewheeling, outlaw energy of the new music, it makes perfect sense that a label in Texas should have snapped up the album which, in keeping with the hands-acrossthe- ocean spirit of the project, was recorded in D Line Studios, Leicester and mixed in Pleasantry Lane, Dallas by Palo Santo co-founder Salim Nourallah.

“The vocals are all live,” Butler says. “We kept the vocal tracks that went down with the drums, so they retain that energy. It’s better than having some producer making you sing it with the headphones on for the 23rd time. Somewhere around take eight you’re going to be losing it.”

Rough, real, full of hard-earned wisdom and a broad streak of black humour, Let it Melt is a late-blooming masterpiece by a band that has walked the walk like no other.

“I don’t think we’d have been able to make a record like this at any other time in the band’s history,” Butler says. “There’s something about it that is definitive of where we are now. Really it’s the truest album we’ve ever made.”

Diesel Park West’s Let it Melt will be released worldwide on September 13, 2019 by Palo Santo Records.

“Let It Melt is a physical and deeply felt release – this is the sound of a band that, far removed from their humble beginnings, still believes in what they are doing and never go through the motions.” – Music Existence

“…esistono ancora band che dopo quarant’anni di carriera non chiedono nulla se non suonare del rock and roll old-style che pare uscito da una svendita per sgombrare un garage che era rimasto chiuso dal 1964, e che lo fanno in maniera fresca e con canzoni che ci rassicurano sul fatto che sì, il rock sarà anche morto, ma i suoi zombi girano ancora liberi in questo mondo, e suonano ancora alla grande.”
“.. bands still exist that after forty years of career ask for nothing but to play old-style rock and roll that seems to have come out of a sale to clear out a garage that had been closed since 1964, and who do it in a fresh way and with songs who reassure us that yes, the rock will also be dead, but its zombies still run free in this world, and they still sound great.”
– Roots Highway