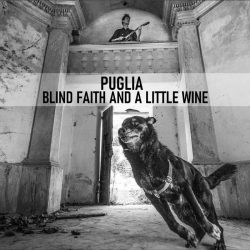 Marco “Puglia” Puglisi came out of the north-western musical tribe of Italy about ten years ago, at the time he was a fresh faced teenager in love with drugs and lo-fi sounding guitars.

Released a bunch of bizarre records under the moniker of “A Morning Loss” and worked his way up through pubs and squats. Recorded an emocore cassette in 2017 with the band “Lettere Da Un’Occupante” and moved to London, England.

After an epiphany with power pop his musical foundation veered towards a more accomplished songwriting that leaded to the cheerish but austere sound of his most recent works. In december 2019 La Fenice Recordings produced last Puglia’s work.

“Blind Faith And A Little Wine”, stands as a brief collection of intimistic and acoustic pop tunes whose nine tracks clearly showcase the author’s fixations: melody and traditional pop structure.

Quoting Big Star on “Hide”, Xtc’s pastoral songwriting on the title track, Jellyfish baroque ditties on “Fancy”, Byrds-ian attitude on “A Questionable Reward Of A Visit To Unaccesible Island” and mimicking chamber pop on “Marseille”, Puglia makes a diligent work of transcription of the sacred writings of Britain’s and America’s classic pop. As a sign of the times, the record was made and conceived in the italian province, a place where kids with laptops struggle to come out of a reluctant environment, but sounds as if a “brill bruising” disciple composed it.

In other words, Puglia is one of the sons reinterpreting the music of their fathers, adding a touch of internet culture’s fear and a drop of melancholia for an “old world order”.

“Beautiful, mature, original, personal, album for Marco “Puglia” Puglisi who climbs in unusual paths for the Italian panorama, precisely because they have an international reach (and his excellent English helps him a lot in this sense). Semi-acoustic sounds that lead us to the writing of Alex Chilton but that does not disdain marked Beatlesian references (especially from Paul McCartney), to Ray Davies of the Kinks, to the XTC (“Fancy” seems an outtake from their unforgettable discography), Syd Barrett, up to the melodic lines of the 60’s Pete Townshend. Excellent.” – Tony Face

“Italy his own Jake Bugg, only that Puglia stands as more creative and stylish” – In Your Eyes ezine

What iyepr have done for PUGLIA